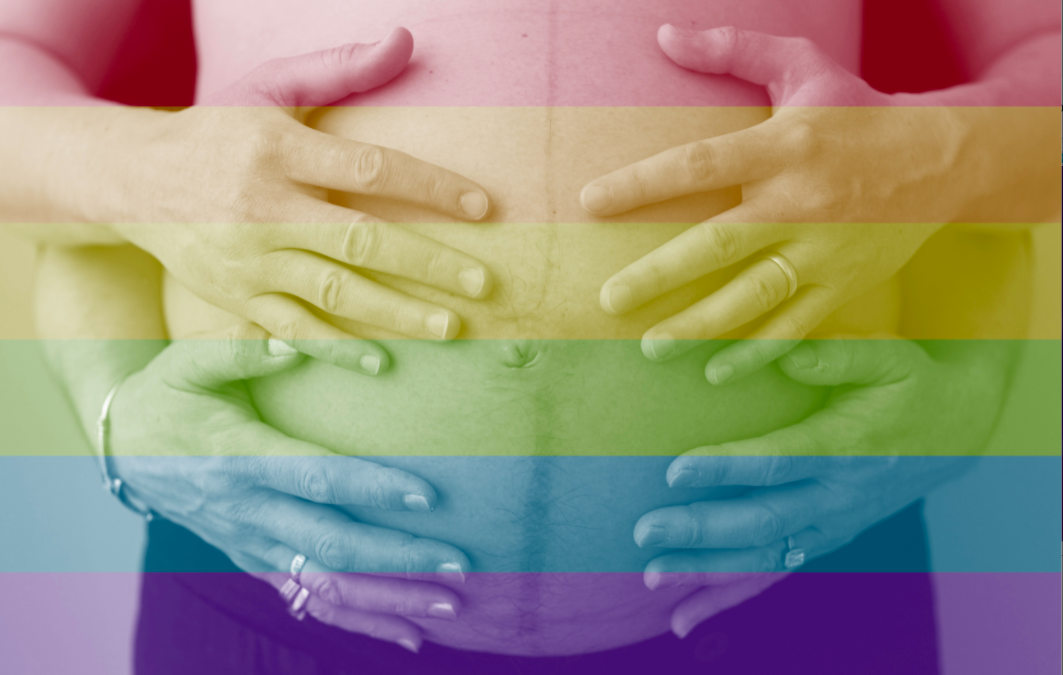 Pregnancy has been considered something that only women can do but people of all genders can get pregnant and give birth. Medical professionals state that there is a possibility for a transgender woman to have a child with a uterus transplant. In the past there have already been cases of cisgender women having children with a transplanted uterus from donors.

Transgender pregnancy is possible. Transgender men and woman have been mistakenly told by health professionals that the use of testosterone will make them unable to conceive a child. This is not always the case and can result in unplanned pregnancies or a general lack of awareness that pregnancy still is a possibility. Taking testosterone may stop ovulation at a certain point but eggs do not disappear. It is important to be aware of this and not get lost in misconceptions.

In order to make this topic more inclusive we can change the way we talk about birth and the traditional views of it being something only a woman can do.  We can help make a transgender pregnant person’s experience be improved by people not assuming their gender and avoid making assumptions. Some ways we can do that is by using gender-neutral language, for example pregnant people instead of women. Using language specific to the parts used in pregnancy like the uterus and ovaries rather than the female reproductive system. Ask for the person’s pronouns and use the ones they identify with. Use the pregnant person’s preferred name; it may not necessarily be their legal name. Professionals can ask for gender identity, which is different than sex at birth. Healthcare professionals can also ask the staff to check what is written on intake forms before addressing the patient. Establishments can provide single-stall gender-neutral bathrooms. Lastly, all staff can be trained on the practices above to make sure everyone coming in is their most comfortable.

Another way to make pregnancy more inclusive as a whole would be to encourage gynecologists to display their offices as welcoming to all. Everyone, regardless of their gender, should be able to come to a gynecologist office for their obstetric or gynecology health care. Many transgender men and woman miss out on the gynecologist experience due to fear of being judged or rejected. Everyone needs to know they are welcome, and everyone’s goal there is to have a safe and healthy pregnancy. The websites and offices for this establishment should be encouraging all genders to schedule an appointment without any fear and making them like a safe place.

Pregnancy should be spoken about without any label of gender. We need to stop assuming a woman is pregnant every time we hear about pregnancy. This can be very offensive to some, and extremely wrong in many cases. Medical professionals have stated that individuals who are transgender can become pregnant and carry a baby. All genders have the ability to become pregnant with the right care and right procedures. The stereotype that women can only become pregnant needs to come to an end, it is 2022, the world is evolving.

Trans parents themselves have openly expressed how they feel about the matter and how they are treated by news outlets. A man named Kayden Coleman spoke out about how hospitals are not set up for trans pregnancies. He felt he missed out on all the perks from a pregnancy because no one acknowledged it or made a fuss about him, everyone assumed it was a “beer belly”. Kayden stated “​​ There was a lot of trauma, most of that came from inside the birthing world, with medical professionals. There was a lot of questioning about my identity, a lot of misgendering. Being told I shouldn’t be in spaces I was seeking care from because they were considered women’s spaces. I was offered an abortion a ridiculous amount of times (TodayShow, 2021)”. They made him feel unwelcome, a bother, and like he was incapable of birthing a baby.

Pregnancy is supposed to be one of the most special and memorable experiences in one’s life.  A person’s gender, sexuality, etc., should not interfere with that experience. Every person deserves to be treated equally, no one is better than anyone else. They are welcoming one of the best gifts into this world, probably a little scared, so being treated unfairly and looked down on will only make them doubt themselves. The mindset that only women can become pregnant needs to be ended now. We are all human, Humans support Humans.