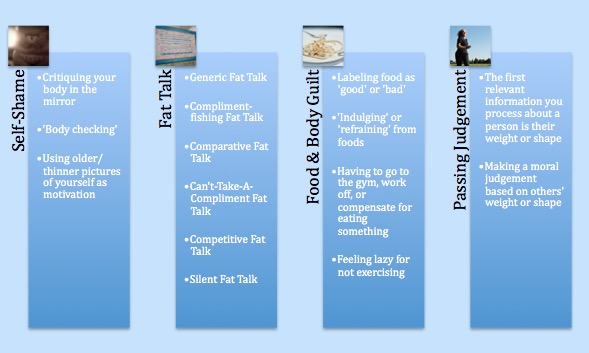 Body shame comes in so many forms and can manifest itself internally or externally. With the many nuances involved in body shame, I thought it time that it was broken down into a more easily-understood graphic depicted above.

Within the types of fat talk, there have been six distinct types identified. Dr. Cynthia Bulik of University of North Carolina has researched fat talk in depth and states that it can be more than just obvious Generic fat talk (“I need to lose weight.” or “This makes me look fat.”, but also more subtle messages that can be equally damaging. Most forms of fat talk are socially-constructed or reinforced, with Comparative, Competitive, Compliment-Fishing, and Can’t-Take-A-Compliment Fat Talk, all of which pit people against each other. Even Silent Fat Talk is socially-influenced; a group of women (or men) share a meal and are guided or guilted by others’ food choices.

But body shaming extends beyond fat talk. There’s self-shame, which doesn’t need any social influence or participation to exist. That’s the shame that happens when you critique yourself in front of the mirror or constantly body-check. Food and body guilt is also pervasive and reinforced socially and through the media. We are made to feel guilty if we eat certain things or do not exercise as often and as much as we ‘should.’ Passing judgment is an area that intersects with weight stigma; we judge people based on their size and draw moral conclusions based on their weight, shape, or size.

All of these areas work in isolation or unison to create a perfect storm of shame, for both ourselves and others. The more we recognize it, the more easily we can work to counter it.